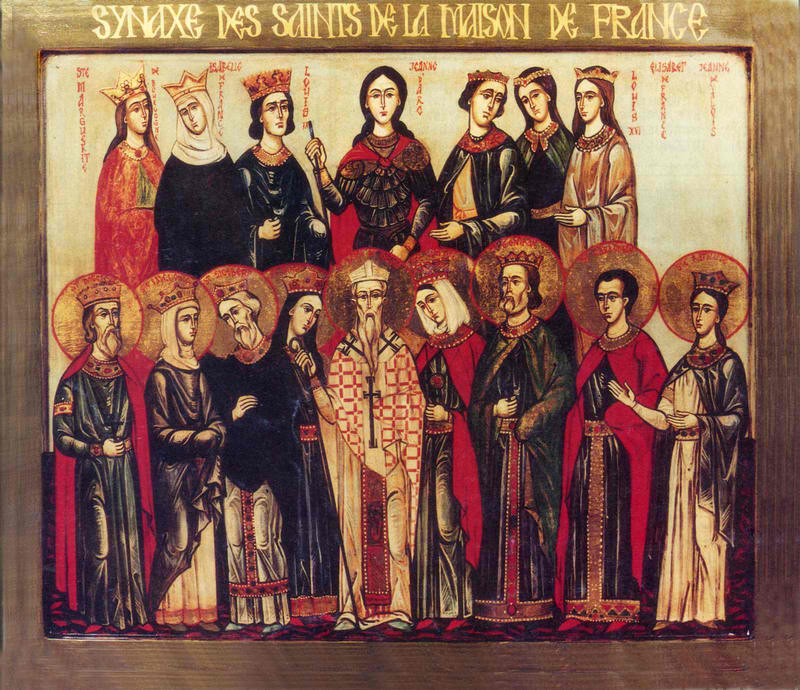 Both eastern and western Christians, on first hearing of Western Orthodoxy, often ask such questions as “Who are these people?” or “Why haven’t I heard of them before?”

First, who are Western Orthodox Christians? Simply, they are those Christians of the West who have discovered the truth of Orthodoxy and who have embraced the Orthodox faith and now worship and practice their Orthodox faith according to the venerable and ancient traditions of the West – traditions whose roots go back to that time when the Western Church was still fully Orthodox. Many westerners who have embraced Orthodoxy have known it only in its eastern forms, primarily because these have been the predominantly visible forms of Orthodoxy in the West.

Particularly in North America, with its manifold Eastern Orthodox Churches sprung from foreign lands, a westerner seeking Orthodoxy almost inevitably has turned to a Church whose expression of Orthodoxy is eastern and Byzantine. For thousands of western Christians seeking refuge in Christ’s true Church, these eastern Churches have provided a home. These Christians have welcomed and embraced the liturgical, cultural, and (often) linguistic forms of Byzantine Christianity, and of them little further need be said here, except to note the fervor of their faith and commitment, and their eagerness to share the spiritual treasure of Orthodoxy with their fellow westerners.

Some other western Christians, seeking a home in Christ’s holy Orthodox Church, have traveled by a different route. These Christians, convinced of the fullness of truth of the Orthodox faith, have been encouraged by those Orthodox hierarchs whom they approached, to retain and use the western liturgical, cultural, and linguistic heritage they have been used to, but purified of any elements inconsistent with the Orthodox faith. These Christians, fully Orthodox in their faith, but following a traditional western observance blessed by the Orthodox Church, may properly be called Western Orthodox Christians. They should be so called, first, to distinguish them verbally from those Orthodox in the West who follow eastern observances; and second (and far more importantly), to distinguish them from those they seem, superficially, most to resemble: Roman Catholics, Anglicans, Old Catholics, and those other westerners who are not members of the Orthodox Church.

In the middle of the nineteenth century, some western Christians, sensing the deterioration of western Christianity — whose roots within the true Church of Christ had been severed at the time of the Great Schism in 1054, but whose branches and fruit have taken centuries to wither and visibly deteriorate — began to seek their home in the Orthodox Church, the Church which the Holy Spirit had preserved in fidelity and grace in the East.

In approaching Orthodoxy, these western Christians (most of them Anglicans and Old Catholics separated from Rome) met wise and holy Orthodox bishops whose vision of the venerable and valid liturgical heritage of the West had not been dimmed or distorted by centuries of separation. Most notably, in 1870 the hierarchs of the Holy Synod of Russia approved in principle the return of western Christians to Orthodoxy with retention and use of the venerable liturgical and spiritual traditions of the West, insofar as these were not in conflict with Orthodoxy. This recognition of Western Orthodoxy was not to flower for another few generations, but the seed had been planted and blessed. In the first decade of the twentieth century, upon the initiative of the future Patriarch of Moscow, St. Tikhon, then archbishop of America, the Russian Synod again approved western-rite Orthodoxy in its Anglican expression.

In the later twentieth century, on a larger and wider scale, western Christians in approaching Orthodoxy have found themselves the happy inheritors of this blessing and have harvested its fruits. There are now communities of Western Orthodox Christians within the Moscow Patriarchate, the Russian Orthodox Church Outside of Russia, the Patriarchate of Antioch, and several other jurisdictions.

In 1937 in France, a group of Old Catholics returned to Orthodoxy, retaining their western liturgical use and customs, first under Russian jurisdiction (the Moscow Patriarchate and the Russian Church Abroad), and then under the Romanian Patriarchate, as the Orthodox Church of France. These Western Orthodox use a rite based on older Gallican models, tested and approved by their Bishop at the time, now Saint John Maximovitch.

In Holy Week of 1961, on the authority of Alexander III, Patriarch of Antioch, Archbishop Anthony Bashir received Father Alexander Turner and his Old Catholic parishes into the Antiochian Orthodox Church, authorizing them to retain their western rite and usages. Upon the repose of Father Turner, Father Paul Schneirla was appointed to oversee the Western Rite Vicariate within the Antiochian Church. There are now a number of parishes under this authority throughout the United States. Some of these use a Liturgy based upon the original 1549 Anglican Book of Common Prayer, (often called the “Liturgy of St. Tikhon”) while others use the rite of the Mass as celebrated in the Roman Catholic Church (often called the “Liturgy of St. Peter” or “Liturgy of St. Gregory”). This rite of the Mass was familiar to all Roman Catholics until they discarded it in the wake of Vatican II and substituted for it the revised Novus Ordo liturgy now used in almost all Roman Catholic parishes.

As discussed in Our History: From Mount Royal to Christminster, the nucleus of what became the Monastery of Christ the Savior was received into the Russian Orthodox Church in 1962.

All of these Western Orthodox communities celebrate their Liturgy (the Mass) in the vernacular – English in the United States and Australia, French in the Orthodox Church of France – but freely use Latin, the traditional liturgical language of the West, in their rites. All of them also use the traditional Gregorian Chant (and other western chants, such as the Ambrosian and Mozarabic) as well as suitable liturgical music of other periods and places.

Why have these people become Western Orthodox? What do they find in their Church that cannot be found in the Roman Catholic, Anglican, or Old Catholic Churches of the West? Quite simply, they have found the Church of Christ — His one, holy, catholic and apostolic Church — and have wanted to be a part of it, knowing that Christ calls all people into His one true Orthodox Church. They have discovered that their former western churches have abandoned, in varying degrees and in different stages, the true Christian faith and have wandered from Christ’s truth. Even the once seemingly monolithic Roman Catholic church has begun visibly to display that inner disintegration it embarked upon when it broke from Orthodox unity in 1054. Other western churches, being offshoots of the Roman church, appear to be suffering the same disintegration.

Orthodox Christians hope and pray and long for the return of their separated western brothers and sisters to the haven of Christ’s true Orthodox Church. Western Christians need to know that, despite the chaos and distress and confusion within their denominations, Christ’s holy Church is alive and well and vigilant in maintaining the true faith once delivered to the Saints. In Western Orthodoxy, with its forms, rites, and traditions so familiar to western Christians, Christ’s Orthodox Church, welcoming its prodigal western sons and daughters, can provide them with a sense of truly coming home to their Father’s house.
Αναρτήθηκε από Global Orthodoxy στις 10:49 π.μ. 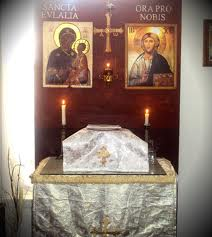 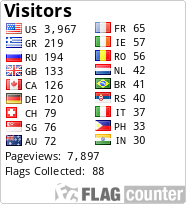 The Western Europe in our Holy Orthodox Faith, in the person of all the Saints who had evangelized its inhabitants during the first millennium A.D., is the only secure foundation upon which European unity should be built and continued.

Orthodoxy is that form of Christianity which gives right glory or right worship to God the Holy Trinity. Orthodoxy is the Christian Church, in succession to the Patriarchs, Prophets, and Priests of the Old Testament, which was founded by our Lord Jesus Christ when He Ordained His Apostles and sent the Holy Spirit upon the faithful gathered in Jerusalem at Pentecost. The followers of the Way were first called Christians at Antioch; and the Christians were first called Catholics in a letter of St. Ignatius of Antioch in about the year AD 98. The Orthodox are the original Christians, the first Catholics, the Church of the Apostles, and the Community of the New Testament.The Western Churches, including that of Rome, were part of the unity of Orthodoxy through the whole of the first 1,000 years. Rome only separated from the unity of the church by making extraordinary claims for the earthly powers of her patriarch (Pope) at the beginning of the 11th century and completed the break with the Orthodox by the 13th century. The usual date of the great schism is given as AD 1054. The ancient churches of Jerusalem, Antioch, Alexandria, and Constantinople are all Orthodox. About 250 million people now living are members of the Orthodox churches around the world with about 5 million in the USA.The Orthodox Church is universal (catholic), has Patriarchs, Archbishops, Bishops, Priests, Deacons, Laity, and a rich Monastic life with Communities of Monks and of Nuns in nearly every country. Most Priests and Deacons are married. Bishops are not married because they are elevated from celebate monastic life for the most part.

Western Rite Orthodoxy or Western Orthodoxy or Orthodox Western Rite are terms used to describe congregations and groups which are in communion with Eastern Orthodox Churches using traditional Western liturgies rather than adopting Eastern liturgies such as the Divine Liturgy of St. John Chrysostom. While there are some ancient examples of Western Rite churches in areas predominantly using the Byzantine Rite (the Monastery of Saint Mary of the Latins, often referred to as Amalfi, is a common example), the history of the movement is often considered to begin in the nineteenth century with the life and work of Julius Joseph Overbeck. Less commonly, Western Orthodoxy refers to the Western Church before the Great Schism.